The system under test I was working with applied a complex set of rules against a source directory and printed any violations of those rules to stdout much like a code linting tool. 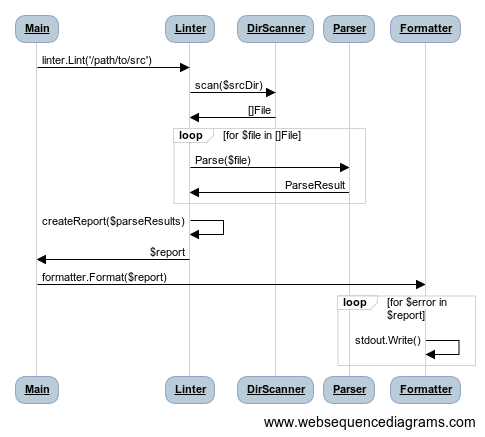 The Formatter is responsible for the final output generating something along these lines:

Before switching to using a Golden Master, the original integration test would supply a fixture to the linter and then iterate over the report returned by Linter#Lint().

This approach, whilst valid, was pretty verbose and was not scaling well as my integration test became more thorough (as it stands I current assert 50 individual error cases over 6 test fixture files) - this feels like a great candidate for using a golden master.

My approach would be simple; I would still pass a fixture to linter.Lint(), but instead of comparing the result object, I would pass it directly to the Formatter and have it written out to a file on disk which could then be loaded and compared in future test-iterations.

To start I copy and pasted the command line output into a new 'golden' file which mated the name of the fixture - the integration test will be modified to read in the contents of this file and use it for comparison.

Next I needed to capture the output of the Formatter, this was not straight forward as the Formatter wrote directly to os.Stdout. I could have used an Interface to provide an alternative implementation of the Formatter which wrote to a file; but this would have resulted in a lot of duplicated logic; essentially there was nothing wrong with the current output; I just didn't want it to to go to stdout. Instead I modified the formatter object's signature from Format(r Report) to Format(r Report, out io.Writer):

The default implementation can pass os.Stdout as the writer (as os.Stdout implements the Write(p []byte) (n int, err error) signature); and our integration test can pass a bytes.Buffer to capture the output.

This passes, but updating the "with_errors" golden master file is a chore. To address this I added a flag to my integration test which made it simple to flip the test-case into an 'update the golden master' mode:

My workflow is now:

It's now a simple case of manually verifying that the golden master generated in step 3 matches the output that I was expecting (made easy with a git diff tool).