This is a supporting post for the talk I am giving at Moo Tech Tuesday on the 31st May where I will be presenting an introduction to Redux Middleware [slide deck] with advice on how to test it. The supporting code can be found over on Github.

Redux describes itself as a Predictable State Container for JavaScript applications; it's a lightweight (~5kb) framework which has a couple of major benefits:

This blog post will be exploring a simple Redux application which will then be extended to provide additional functionality implemented as Redux Middleware. I will also be demonstrating how it's easy to write test-cases for Redux Middleware.

Redux's architecture was inspired by the Elm Architecture and differs from traditional MVC in the way it enforces a strict uni-direction flow (or cycle) of data from the View-tier to the Model and back again.

In traditional MVC based systems you will often find a stateful controller object which has both the Models and the Views injected into it. The controller will be responsible for fetching data from the models and passing that data through to the views for rendering; as well as binding to events from the view tier as the user interacts with the application. Depending on the exact MVC implementation the Controller may also be responsible for handling API calls and other custom business logic. As a result of all these responsibilities and dependencies, Controllers can typically be difficult to bring under test. Some MVC implementations can compound this problem further by introducing two-way data binding where the Controller is essentially side-stepped and the view and model are injected into each other. IMHO this is a classic case for Simple over Easy and should be avoided for long-term maintainability of software.

In contrast to MVC implementations, Redux does not require a centralised Controller, instead an application boils down to two tiers: The Store (which holds a reference to the single state object, aka atom) and Views.

This form of loose coupling and one-way data flow is what makes Redux applications both easy to predict and easy to test.

Note that whilst Redux is typically partnered with React, it does not have a dependency on it and can just as easily be paired with Vue.js or plain old DOM manipulation methods with no other dependencies.

The rest of this post will be dedicated to extending a simple application. The consists of a single React view component that offers a counter and two buttons. Users are able to manipulate the counter by pressing the increment and decrement buttons.

The Counter component is connected to the Redux framework via the connect method which wraps the Counter component with a state-mapping function (state => state) - in this case we are simple accepting the state object from the Redux store with no changes. As a side-effect of being connected, the component also receives the dispatch function in its properties as well as the properties contained in the store's state object. (in this case, just count).

Each button invokes dispatch when clicked which creates a new action object with a type property of either 'INC' or 'DEC' based on how we want the counter's value to be mutated.

Next we have the reducer function for the application; here we simply switch on the incoming action object and return a new state value. Redux will automatically invoke your reducer function with the current state object whenever dispatch is called. Returning a new object (as is the case for both INC and DEC cases), will cause Redux to re-render the view tier thereby updating the counter's value on screen.

Bringing Back the Controller

So far our same application has been very simple and has not introduced side-effects. Side-effect is the term used when a function modifies some state elsewhere in the system, or interacts with the outside world (ie: makes an API call). Managing side-effects effectively is key to ensuring that your application stays both predictable and easy to bring under test as functions with side-effects require the reader to understand knowledge about the wider system's context and the system's state prior to the call. Redux provides a simple yet powerful mechanism for managing side-effects: Middleware.

Redux Middleware sits between the view-tier and the reducers giving you a hook to invoke asynchronous business logic after each action has been dispatched. Middleware is used to enhance a store when it is created through the applyMiddleware function provided by Redux:

The Redux Middleware signature can look a little daunting at first with three nested functions required:

Okay, let's start getting a bit more concrete and implement the first piece of code for some custom middleware:

The reportMiddleware will intercept all actions after they've been dispatched. As per the user story, we only want to track 'INC' actions. Regardless of the type of action we must always pass the action through to next otherwise it will not be reduced and the app will no longer update when the user clicks on the buttons.

As mentioned at the start of the article, one of the main benefits of redux is the ease of testability - this is especially true for Redux Middleware which can be used to express complex business logic which remaining trivial to test. In the follow examples I will be using a combination of Mocha, Chai, SinonJS.

Let's start by writing a test which ensures that the intercepted action is always passed the the next function.

Working backwards, we want to assert that the next function was called with a given action object.

To implement this we need to instantiate an action and then pass it through to our reportMiddleware invoking each one of the three methods in order replacing both the store, and next arguments with fake counterparts.

The fakeStore is nothing but an empty object (as our API doesn't actually interact with the store API) - however the fakeNext is slightly more complex providing a function which records the arguments it was called with storing them in the args property on itself.

The apparatus in the test-case can be simplified by using Sinon. Sinon provides a Spy API which provides instrumented functions which records how they were called and can be used to write expressive assertions:

If you are new to SinonJS, then you may also be interested to learn of the Stub API which allows you to program the return value of functions, including those attached to existing objects (eg: jQuery.ajax).

As the product manager I would like to know when users have clicked the increment button 5 times for reporting.

This requirement means that we have to observe the number of times the increment button is clicked. We could model this state in the view-tier, however that could result in the logic being hard to isolate and test - likewise we could push it into the Store's state, however this will make our core domain model more complex and potentially harder to reason about - I feel Middleware is a good fit for this type of problem.

We start by wrapping everything in yet another function: newReportMiddleware. This function acts as a factory and its closure is used to encapsulate the report middleware's state. This makes it possible to have multiple instances of the same middleware in use at once, but it also makes unit testing much easier as we can guarantee that all state will be reset between tests.

Our business logic is simple, each time we see an INC action we increment the middleware's internal count of INC actions by one. Next we introduce the logic for detecting when 5 INC actions have been intercepted:

Great, now we get an alert dialog after every 5 clicks of the increment button; however this isn't very easy to test (and i doubt the author of the User Story had an alert box in mind...) - instead we can leverage our newReportMiddleware factory function again and use it to supply a configuration object with both a callback function to invoke and a target count value to mod by.

With an arguments object in place we can now write a simple test to ensure that the supplied callback is invoked after a given number of INC actions have been intercepted:

We use sinon to setup spies for both the Redux Middleware API's next function and our own reportMiddleware's callback function. It's worth noting that sinon.spy() returns a normal function which can be used interchangeably.

Next we send two actions through our middleware, an INC and a DEC. At this point the middleware's numIncActions value should be 1, which is not equal to the target value of 2, therefore the callback should not have been invoked yet. This type of assertion acts as a safety net and can make debugging failing tests much easier.

Finally we throw one last INC action through, we can now check our business logic was implemented correctly and the callback invoked. 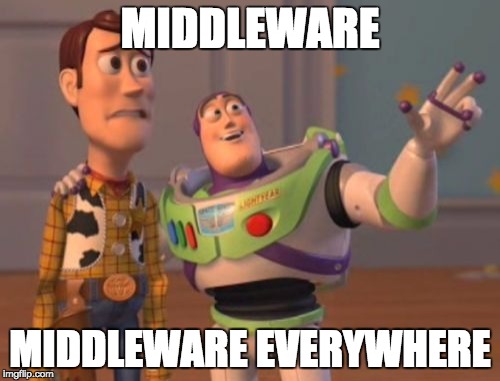 This post has hopefully shown how Redux Middleware provides a simple abstraction which makes it possible to write complex logic that is both predictable and easy to test. In my day-job we make extensive use of middleware to model all of our application's side effects including XHRs, analytics and multi-stage API calls. If you find yourself getting tired of writing middleware boilerplate you may be interested in taking a look at Redux Saga's which make use of ES7 generator functions to provide a psuedo-blocking API for your side-effect management